We often get asked about this topic, but before I delve into the Youtube part of this story, let's start with just a little bit of background on our decision to Full Time RV…

In December of 2016, Tara had been undergoing an intense antibiotic protocol (hooked up to IVs 2-3 times a day) to treat her chronic Lyme Disease. During this time, and for many months before and after, she was barely able to leave the house. As a result, we spent a lot of time watching travel shows.

One night, we were watching “Big Time RV“, and one of the couples on the show lived in an RV and worked from the road. A light bulb went off in my head and I posed the question as soon as it hit me: “What do you think about getting rid of the house, selling everything and traveling in an RV full time?” I was already working full time from home. As long as we could figure out reliable mobile internet, this just might be possible! Her answer was somewhere along the lines of “I think that's a #$@! genius idea! Let's look into it!”

Tara still had several months of her hardcore IV treatments left, so we gave ourselves one year to research and execute this plan. December of 2017 was our goal!

One Idea Leads to Another

During our full time RV research, we came across several youtube channels like Keep Your Daydream, Long Long Honeymoon, and Less Junk More Journey, all with full time RV channels. Then, somewhere in the summer of 2016, we thought maybe we should make our own youtube channel with our own niche and style. We hadn't seen any popular channels doing full time RV with a motorcycle and riding all over the country. So, we figured let's give Youtube a shot!

Although I had posted some very amateur videos about motorcycle mods (and skydiving), we knew we had a LOT of learning to do. If we were going to do this, we wanted to make it a proper and professional looking channel. Since we had plenty of time, we bought some cameras, practiced filming and talking to the camera. It turned out, talking to the camera and not looking like a stiff was much more difficult than we had anticipated! We also learned how to edit with Final Cut Pro X and made some practice videos.  We were basically winging it with what we could piece together from the sea of disconnected information online.

Maybe someday we'll share some of that early footage. We were horrible at talking to the camera and it was obvious how uncomfortable we were. So, maybe…. someday… ?

Learning to Film and Edit

For the next six months, along with learning all we could about RVs (and selling everything we own), we studied how to make proper videos. We worked on how to film with a DSLR, film with a drone, what kind of gear would work on the motorcycle, how to get good audio, and on and on. While I focused on a lot of the camera self education, Tara dug in on the editing side, learning how to use Final Cut Pro (mostly from courses on Lynda.com – a great resource). Tara was still very much bed ridden much of the time, but very driven to learn. Luckily we had enough time for Tara to learn at her own pace. Her Lyme is also neurological, so she has to take things in slowly.

During this time, we also settled on our name. Coming up with a name was much more difficult than we thought it would be! We secured several domains along the way (thinking each one was awesome at the time), but none of them seemed quite right. Then we hit on Changing Lanes… Bingo! It fit perfectly with how we were changing lanes in our lives. It was catchy, easy to remember, and was exactly what we wanted to encourage others to do… When life has you in a rut, Change Lanes! Now we needed to come up with a good brand logo, which was the next step!

We used Design Hill to launch a contest for our logo design for $179 (one step up from the cheapest), and hoped for the best. The process was actually very simple to navigate and we got 77 design proposals. A good majority of these were absolute crap (airplanes in the logo – really?), but a handful were close to target. Design Hill allows you to go back and forth with any or all of the candidates to tweak the designs, which is awesome! We eventually narrowed it down to one design and went back and forth with that designer, making minor adjustments, until we have the logo you see today.

After a year of learning everything we could about RV life, it was time for our new life (new “lane”) in the world of Full Time RV living to finally begin! Holy crap! This is real! On December 20th, 2017, we took delivery of our brand new, custom order, Grand Design Momentum 397TH! This marked, not only the beginning of living in an RV, but also documenting every step of our journey. While we had filmed a lot already, it was now time to start building our catalog of media. At this point, we weren't sure exactly what our videos would be like in terms of format. Pure vlog style? Super cinematic? Reality TV? But we knew we'd want footage from this point forward of everything that might be worth sharing. So, we just filmed for the next six months to build up some content (“in the can”) for when we would launch.

We were about 4 months into our RV life and about two months shy of launching our channel, when Marc Leach (Keep Your Daydream) launched a new course called How To Start Youtube Channel.  We loved following KYD not just for the content, but we also recognized it was a top shelf operation. The whole channel, everything from logo and branding to production, was all top notch and very professional. Marc and Trish had clearly created a very successful channel and brand. Now, Marc wants to share his secrets?
Count us in!!!

Even though we had already done a lot of ground work to launch our channel, going though this course step by step was exactly what we needed before launch!  At this point, we didn’t know what we didn’t know. Having the whole process laid out step by step filled in a lot of gaps that we didn’t know existed.  Not just the nuts and bolts of how to create the channel with the proper settings, but also tips on channel branding, camera selection, editing, SEO, analytics, etc.  All of the tools one needs to not just launch a channel full of videos, but tell your story and create a successful connection with your audience.  The timing couldn't have been more perfect. After completing the course and following Marc's advice in some areas we were lacking, we were ready to confidently launch our channel!

We very highly recommend the How to Start a Youtube Channel course if you're considering launching a Youtube channel and want to make sure you get started on the right foot!

On May 20th we uploaded our first five videos, including our “about us” channel trailer. We also launched this web site as well as our presence on Facebook, Instagram, and Twitter to go with it. Let the games begin!

Now, it was just a matter of uploading every week and hoping people like us and our content enough to subscribe and keep following us. But the learning and improving never stops and hasn't stopped. This is where I must plug Marc's course again. While the course itself is awesome, I think the best part for us long term has been having access to the accompanying private Facebook group! The Facebook group has been an absolutely amazing resource that we use daily.  It’s full of other youtube creators with genres all over the spectrum, sharing ideas, getting feedback, and asking questions.  Being able to connect with and bounce ideas off so many people (including Marc himself!) is extremely helpful. We've also formed some close friendships through it that we'll keep long past our Youtube days. It’s truly a very amazing group of people, and we’re thankful and proud to be a part it!

It's now almost 10 months since we launched our channel and Changing Lanes has grown to over 31,000 subscribers! Wow! To say we have gone beyond our expectations is an understatement! We are so very humbled and thankful for every single one of our regular viewers (and readers)! It's so amazing to hear that we're making a positive impact in people's lives and encouraging many to go out and change their own lane! It's what drives us to keep striving to produce quality content and continue to work on improving and growing as content creators.

Note:
Some of the links / codes on this page are affiliate links, which means if you chose to make a purchase using our links, we will earn a commission.  This commission comes at no additional cost to you, but helps us keep providing the content we love to share.  We recommend these products because we have found them to be helpful and useful, not because of the small commissions we make.
Every product we recommend, we use ourselves. 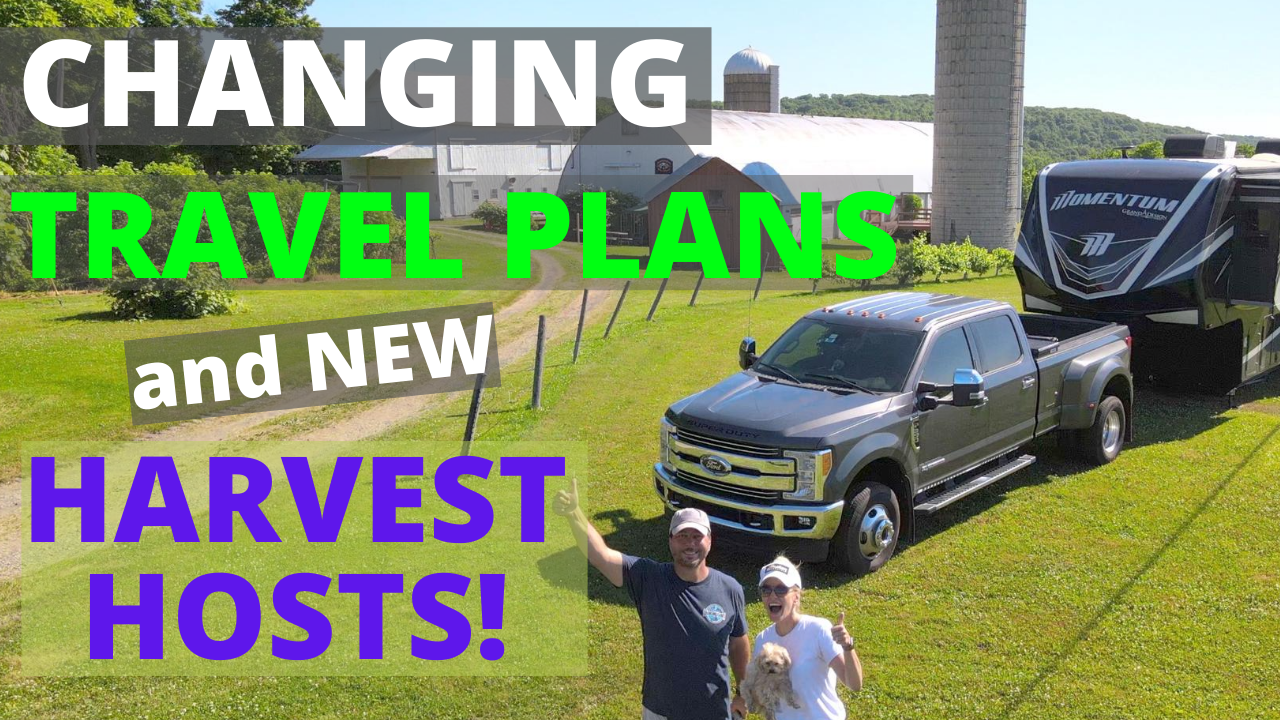 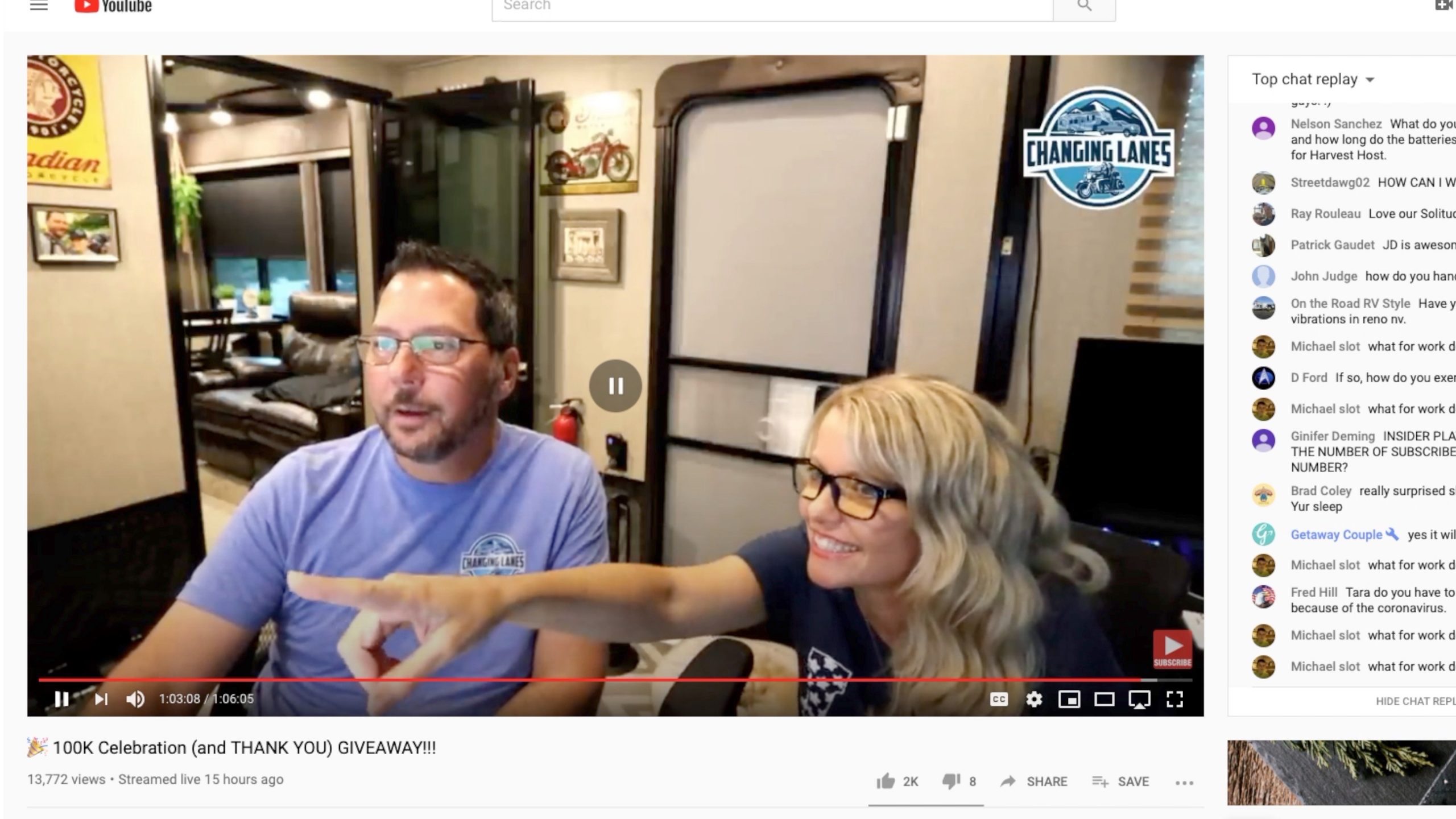 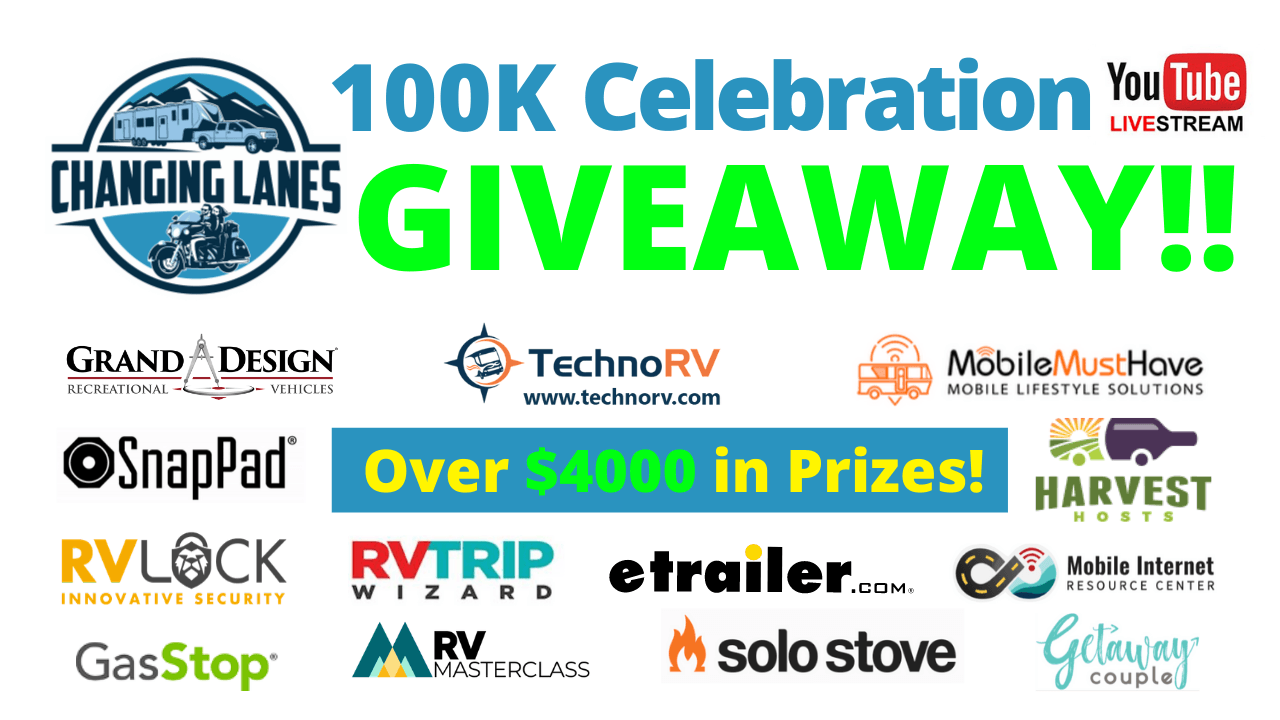 The BIG GIVEAWAY is CLOSED!!! 😞